The Glass Bottle - a True Story 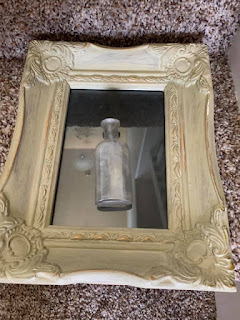 A couple weeks ago there was a garage sale at a neighbors. John had just had his 99th birthday and I was worried that he had passed away. I wandered over there and found a picture frame and an old glass bottle for my art projects. The lady at the check out said he had gone to a nursing home and that he agreed to the church members holding the sale for him and all proceeds were to go to a lady at the church who had 6 kids and no car. What a nice gesture on his part!

Several weeks went by and I was trying to decide what to do with the items. The glass bottle had an inscription on it:  W H NYE Druggist Boise City, Idaho. I googled his name and found out he was buried in the Pioneer Cemetery B.1833-D.1894 Served with the Army of the Potomac. Honorably discharged shortly after Antietam. Druggist before the War in the East and afterwards in Boise, Idaho.

I knew the bottle was probably old but not over 125 years old!

I looked up the battle of Antietam and didn't find his name in the register so I contacted the webmaster that I had a name for him. He was thrilled to add Captain Nye.
I can't believe I helped add to a page on the Civil War. Here is the link: http://antietam.aotw.org/officers.php?officer_id=18134

Posted by Pam McKnight at 7:19 AM No comments: Links to this post

Posted by Pam McKnight at 2:50 PM No comments: Links to this post

" But Love Goes on Forever"


Posted by Pam McKnight at 4:18 PM No comments: Links to this post


What do you think? I sold one the next day and still have 6 available. Thanks for looking.


Posted by Pam McKnight at 1:30 PM No comments: Links to this post

In between filling out applications for various shows, working on the cello project and The Sketchbook project, I've been working on this fun little project for "Thrifty Show." A Swell collective show using something from a thrift store.


Posted by Pam McKnight at 10:19 AM No comments: Links to this post

In December I answered a call from the Treasure Valley Artist Alliance to Artists to make a cello into a work of art. 2 artists would be chosen and I was one of them! Below is my proposal:

A few years ago I was given a violin in disrepair to use in my art. I had fun turning it into an homage to a Native American violinist. Researching Zitkala-Sa I used paint, found objects and collage elements to represent the musician. In this project I would use metal gears and chains and other cast off items to turn the cello into a steampunk cello. This idea sprang from my research on famous women cellists and I came across a current cellist who plays in the style of Steampunk music. I was intrigued by the name she goes by: “Unwoman” taken from the book “The Handmaids Tale” Unwomen are the lesbians, feminists and others who wouldn’t submit to authority. I related to Unwomans answer when asked about her creative process. She said each song might have a unique creative process since there is so much experimentation. Some of it is on the fly and some of it is labored over. In my art I enjoy taking items that no longer have an intrinsic value in and of themselves and relish turning them into something new to be enjoyed by someone else rather than end up the in the trash. I would be honored to be chosen for this project.


Posted by Pam McKnight at 1:20 PM No comments: Links to this post

All art is available for purchase.
Website: boiseartist.wix.com/pammcknight
Email: boiseartist@gmail.com

The ABCs of Every Little Thing

I have long been a collector of miniatures. Wherever I traveled, I always kept an eye out for the tiny and unusual. For years these treasures were displayed about my studio, and from time to time I would try and give them a dusting (not an easy task), but seldom took time to enjoy my treasures.

Over the years, my artwork evolved from primarily painting to assemblage and multimedia works. My lifestyle also evolved from one of having to one of doing. It is in these new works that these two passions came together.

Every Little Thing is my attempt to combine the fun and whimsical nature of my miniatures with my creative passion. I chose an alphabet theme to acknowledge my years as an elementary art teacher.

I hope that you'll take a moment to browse through my new work, and hopefully smile when you see what these crazy miniatures did when they finally got off that dusty shelf.

This is a Flickr badge showing public photos and videos from mcknightpam. Make your own badge here.

Promote Your Page Too